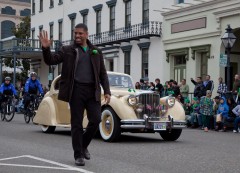 Ryan Lillis, one of the Bee’s big three reporters doing actual professional journalism on the topic of the arena, reports today that Mayor Kevin Johnson and Kings co-owner George Maloof have decided on a sit down meeting this week to discuss possibly reviving the DOA arena deal.

Reading that this morning, the question you might have is does the Mayor actually do anything except work on this arena deal? When is the last time you remember hearing the Mayor’s name in connection to anything except this problem. I’m only being somewhat facetious as this is big news in these parts and maybe it is getting squeezed out. But somehow I doubt that KJ is out there working on anything else.

As for the actual deal getting new legs, I’m not sure whether this puts the City on better or worse negotiating ground. As the deal went away when the Kings balked at having to put too much into it (at least in their eyes), and the City called their bluff on that, it would seem that any future discussions would have to favor the Kings. On the other hand, public goodwill is on the side of the City, so that hurts the Kings’ position.