From the Wahoo’s Story

According to Cowtown Eats, which I have been remiss in not re-blogging more often since they give us so much traffic on Twitter, the venerable So Cal chain Wahoo’s Fish Tacos is planning to open in Sacto a week from today.

During the Handle District’s annual Bastille Day Waiter Race on Sunday, they had employees handing out coupons for free entrees. One of their employees freely shared the info.

They also invited me inside to take a look. The space is still unfinished, with at least several days worth of work left on the interior. If I had to guess, even if they open on the 21st, it’ll be several weeks before they get all they move from the “soft launch” phase to the “well-oiled machine” phase.

The location is on L street at 18th–Cowtown says 1818 but Wahoos.com says 1820, but I’m sure there will be fish imagery to lead you to the right place. This just kind of makes me long for Pescado’s though, and that insane salsa they used to make, which I have never seen prepared exactly as well anywhere else.

Missed this the other day, but heard about it from a longtime Sacramentan friend. Food & Wine magazine named the deli at Corti Brothers in its list of best American delis. This puts it on a list with the most famous delis in America, and the writeup highlights its meat department which “stocks nearly everything, including kangaroo or antelope meat.” I know what I’m having for lunch.

Via News & Review, whose readers last year named Chando’s the best burrito in Sacramento, it appears the Arden Way taqueria made Selection Thursday in a new bracket to name America’s Best Burrito. Apparently Chando’s made the list in an effort to reduce L.A.’s footprint on the list.

In an effort to bring in diversity of style and geography, we came to some unexpected choices: Chandoâ€™s Tacos in Sacramento, Rosa Mariaâ€™s garbage burrito in the Inland Empire, Spencer Makenzieâ€™s (a fish restaurant that also serves tacos and burritos) in Ventura and Dos Chinos in Costa Mesa, an Asian-Latino fusion superstar. None would have made it on VORB score alone, but expert knowledge and an offer of something very different won each establishment a place in the bracket.

Any other Sacramento burritos that you think could have made the list?

Quick background: I wrote a piece a bit ago about newly opened Mother restaurant. It was one of the few pieces in town that didn’t sing its praises like the Mormon Tabernacle Choir all hopped up on whatever Mormons are allowed to drink. It had its share of snark (that is our mainstay y’know), its critical moments, and positive moments as well.

A few people who felt close to the project, as diners and partners, derided the piece as ignorant, unprofessional, and poopy-headed. Some made disparaging remarks that bordered on personal attacks. Many of these people didn’t realize that they knew me IRL which made for entertaining if not awkward reveals. Thankfully, no feelings were actually hurt in the making of that blog post.

So, after much encouragement from friends and other writers, I returned to Mother recently and gave it a second shot.

First, I came with backup. I brought a fellow food writer, her husband and their adorable daughter to round out the party. For sake of ease, we’ll refer to them as “The Coolworths.”

The Coolworths and I got a nice table by the kitchen (honestly, every table is by the kitchen) and were waited on by a super-friendly staff member. It wasn’t long before the the chef. Michael Thiemann, dropped by the table to say hi, see if our beer was ok, and make it very clear, I mean Riedel crystal clear, that he knew exactly who we were. There was no avoiding it. It was a, “Hey sac-eats, thanks for coming back, I hope everything winds up being to your satisfaction” kind of conversation. Except that he didn’t call me sac-eats. He knew exactly who I was, no internet handle required. However, rather than being a dick, he was kind of lovely about it. END_OF_DOCUMENT_TOKEN_TO_BE_REPLACED

Have you heard? A new restaurant opened up on K Street. It’s vegetarian. It’s hip. It’s different. It’s the toast of the town. And I can say that because toast is vegetarian.

It’s called Mother. And if you don’t read the local print journalists, then you might not know that Mother is the best restaurant to open in the area since a tired woman first roasted a bluegill trout on the banks of the American River after first coming over the land bridge about 12,000Â years ago. Seriously. If you think I’m kidding, read this. Or this.

People I know are going batshit about this place. I expect this of the vegetarian and vegan community in town, with their Jehovah’s-Witness-level zealotry and their incessantly low reviews on Yelp of restaurants that don’t cater to their self-imposed dietary restrictions. But straight up eaters are singing this joint’s praises. So, you go. Right? END_OF_DOCUMENT_TOKEN_TO_BE_REPLACED 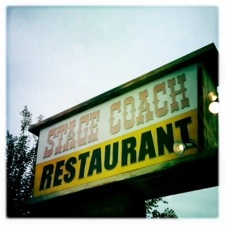 Sometimes brunch won’t do. Some mornings, the thought of mimosas and purse dogs and hungover waiters sours the stomach more than last night’s libations. Some mornings, breakfast is the only solution for what ails you. And a very specific breakfast at that, one with potatoes, biscuits, eggs, and all the other fixin’s. But, every now and then, you need to go farther. You need a gut bomb that feels like it was especially prepared by Paula Deen’s grandma, you know the one that thought the rotund racist was “too skinny” and kept inducing her to eat sticks of butter like they were popsicles. On those mornings, you go to the Stage Coach.

Â Unprepossessing with its A-frame roof andÂ 50-year old sign, the Stage Coach Restaurant offers the homiest of down-home cooking, the most comfortable of comfort food, the bombest of gut bombs.Â And, with its Florin Road location it also offer an intriguing intersection of white, black, Hispanic, and Asian customers who tend to mingle together in a common cause in a way usually reserved for houses of worship.

END_OF_DOCUMENT_TOKEN_TO_BE_REPLACED

It may come as a surprise to you, but the small restaurant footprint on J at 20th has gone through three iterations in the last few years. I know, you didn’t even notice. You were totally unaware that a place named “Had’s” strolled in there in 2011 and was gone by Inauguration Day. And honestly, we saw it coming even if you didn’t. Had’s? Really? What kind of a name was that? And the cursive script it was written in made us ask ourselves “Is the place called Shad’s? or Had’s? Of Ffad’s?…Fuck it, we’re not eating there.”

Before that, it was a sushi place so memorable that no one can remember its name. Sushi Place? Sushi Joint? Sushi Sushi? It was something awesomely memorable like that. They apparently served the best edamame you can get on that block of J Street.

Living Social is first to break the news. Can’t wait to try it out.

“More than 60 years ago, husband-and-wife team Jim and Margaret Knudson started a small mobile restaurant in a converted 16-foot trailer, where they grew a loyal following with their delicious homemade tacos. Fast-forward to today and the four area locations…”

The date’s been announced for this year’s 2nd annual Burger Battle at Raley Field. Last year’s event was pretty beefy, and this year’s will probably be even more so. My favorite burger last year was a tie between Kupro’s and Flaming Grill, the former going for a luscious meat blend on a squaw roll and the latter going for lamb with moreÂ fixingsÂ than the law allows,Â but I felt neither got the recognition it deserved, mostly because Kupro’s has a crap reputation amongst many and Flaming Grill is amazing, but still mostly a parking lot across from former Catholic girls school.

Should you want to start your own burger battle a little early, I draw your attention to an old favorite of many, but a new find for me, Scott’s Burger Shack.

Scottâ€™s Burger Shack on Franklin Boulevard serves a burger called the â€œFat Boy,â€ a hefty Â½ pound patty topped with bacon, two kinds of cheese and all the fixinâ€™s. Itâ€™s a juicy, rich, gut-busting good time. For my friends in nearby Land Park, Curtis Park, and Hollywood Park, itâ€™s a neighborhood treat not to be missed. Be warned, however. To say that conditions at Scottâ€™s are Spartan would be like saying the Bates Motel has a strict checkout policy. The order window is the size of a wet-nap, the three tables outside have the rich patina of 25 years of spilled ketchup, and the surrounding exhaust-flavored parking lot is less than savory. Totally worth it.

Dish 1: It looked like a pile of burnt, crumbled hamburger meat over a base of somewhat loose, nearly separated risotto. Dish 2: It tasted like a chicken breast stuffed with a banana cream pie. Dish 3: Had the vegetable lasagna not been cold, it may have been satisfactory. Dish 4: For a slightly tough lamb shank, it was tasty if a bit cool.

These are not the entrees you should be serving. These are especially not the entrees you should be serving when the Eats clan has invited the Crushers to come along and evaluate a new eatery. If you don’t remember the Crushers, they’re great friends who do not hold back when served a shitty meal. And rarely stay quiet when they’re served a somewhat ok meal. They expect no errors at a $20 a dish joint, and just short-of-perfection at a $5 hash house.

This is also not the food you should be dishing out when you’re on the radar. How should you know you’re on the radar? Well, first comes the attention from Bee critic BAR, then an increase in Yelp reviews, then you wind up having two reviewers (Garrett McCord from SNR and Vanilla Garlic was at the table next to us) in on the same night. We’re talking NSA level-Zero Dark Thirty radar going on. END_OF_DOCUMENT_TOKEN_TO_BE_REPLACED