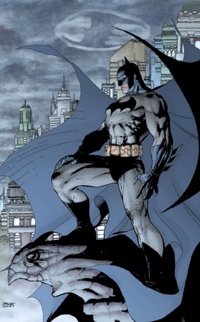 My county lawyer contact clued me in to a real corker of a legal drama. According to the Sacramento County Code, sales of “crime comic books” to children under 18 is a misdemeanor. It dates from 1959 and there is no way to read it that doesn’t make it a crime to sell kids almost any comic book in which superheroes fight crime.

The Board of Supervisors specifically finds that the prohibition against the sale to or circulation of crime â€œcomicâ€ books to children is a reasonable measure to meet the clear and present danger hereinabove found. (Ord. 652 Â§ 1, 1959.)

Among the findings that caused the “clear and present danger” was the finding that “Many children have been incited to commit crimes as a consequence of looking at crime ‘comic’ books.”

An ordinance with the exact same wording was attacked in 1959 in Los Angeles County and found unconstitutional. It doesn’t appear to still be on the books in LA.

Laws like these were created in the late 50s as a reaction to “Seduction of the Innocent,” a 1954 best seller that blamed juvenile delinquency on crime and horror comics, like those published at the time by MAD Magazine’s William Gaines. The comics industry subsequently created the Comics Code Authority to self-censor objectionable content. The CCA is no longer operating and even the big publishing houses no longer carry the seal.

Obviously the County is not enforcing this code. (YET!!!???) And I don’t think even at the time that it would have ever been applied to superhero comics, though I’m not sure how as there is no exemption for “comic” books about caped heroes. (There is, however, an exemption for The Bible.) But what should local comic book shops do about a 16 year old who wants to read Brian Azzarello’s “100 Bullets” or Ed Brubaker’s “Fatale,” both some of the best of the genre and both clearly “crime comics”?

How much work would it take to remove this ordinance from the County Code? Any other silly ordinances we can riff on?

One thought on “Batman illegal in Sac County?”