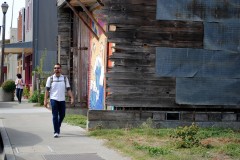 The Sac Bee front page article on Isleton’s problems and the man who’s been hired to clean them up would be hilarious if it was not so sad. Scratch that, it’s just plain hilarious:

“The police force no longer exists, again, and one of its five patrol cars is covered in spider webs behind City Hall because someone put sugar in the gas tank.” END_OF_DOCUMENT_TOKEN_TO_BE_REPLACED