My in-laws live up in beautiful Nevada City, CA and are big cycling fans, so this year’s AMGEN Tour is a pretty big event. Though I didn’t make it up the hill to enjoy the festivities with them, here are some photos they sent along of the day:

Racing fan Fitz making her way to the press area:

The Radio Shack bus (Lance’s team) is parked way up the hill, sort of away from the crowds. Other team buses along the left were extremely accessible to the fans. Such a cool sport for being this open to the fans. 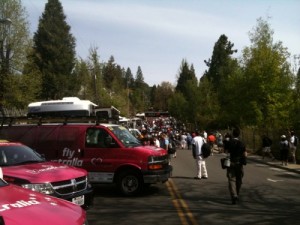 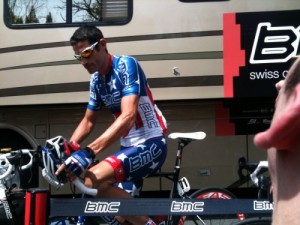 Belgian heartthrob Tom Boonen! The young man on the right is my brother-in-law, who as you can see is wheelchair-bound. Boonen, who won the Sacramento stage in 2008, apparently ate pavement at the finish in Sacramento, though.

With more than 40,000 cycling fans descending on the city, and big praise from Lance this was a big day for “Carmel of the Sierra Foothills,” a nickname which is probably not going to catch on.