$70 for the toddler version!

We all know about the Black Friday deals that bring out the best in people, but running a close second is the release of Air Jordan basketball shoes. Just like in 2009 (wow, to the day no less), folks went nuts this morning trying to get their hands on the $170 sneakers.

When Champs, which was selling the highly coveted Air Jordans, couldn’t handle the crowd, workers called in security and Citrus Heights police officers. Now, store management is refusing to open the gate until the crowd disperses.

Many said they will easily sell the shoes on Ebay for up to $500. Arden Fairâ€™s security team hired eight off-duty Sacramento police officers to secure the area. Overnight, as some people tried to cut in line, fights erupted, according to those who were waiting. In past years, people who managed to buy Air Jordans sometimes lost them to armed robbers as they left the mall’s property.

On the plus side, I did notice that my 2009 post mentions the shoes selling for $175. This year’s version are going for $170. Inflation, shminflation.

The “Reliable Sources” blog on The Washington Post is reporting that Mayor Kevin Johnson is engaged to be married to Michelle Rhee, the Washington, D.C. schools chancellor and former board member of KJ’s St. HOPE.

Spokesperson-for-hire Steve Maviglio, who for the last few months had been blogging on Sacramento Press, announced there today he will be leaving the Sac Press “for a while.” Why? Comment flaming. Don’t get him wrong, there are many good commenters, he says…

However, there are some, who typically hide behind screen names, that think name-calling and obscenities are effective ways to make their point. Unfortunately, Sacramento Press, in most instances, allows these comments.

He actually cites the Sac Bee as an example of moderation in the area of public comment. Read the whole thing here.

I know this is old news, but I couldn’t help but chuckle while watching the video of KCRA’s Dave Bienick chasing down Sacramento Mayor Kevin Johnson’s SUV yesterday.

At that point, the SUV drove away and went back to the front of the building. KCRA 3 followed, arriving just in time to see Johnson hop into the vehicle and ride away.

Bienick called for Johnson to stop, but he did not.

By the way, I’d love to “Watch live coverage of Mayor Kevin Johnson’s weekly news conference at City Hall, during which he will discuss a possible obstacle to Sacramento receiving federal stimulus money.” but how many flippin’ Firefox plugins do I need to get this stuff to work? Here’s the follow up story.

At any rate, well done, Dave.

Larry King continued his non-stop Obamamania tonight by replacing his entire LarryKingLive operation with African-American men. D.L. Hughley gave sporadic play by play from the Huffington Post party while Larry chatted about history with Mayor KJ, Seal, and Puffy P. Diddy Daddy. Puffy being interviewed cracks me up since he always looks like he has just been kicked in the nuts. The best question was when Larry turned to Puffy and asked, “Sean, does it seem like Obama has two balls and no strikes?” Thankfully, Larry quickly explained, like when Seacrest offered a high five to a blind guy on American Idol this week.

Mayor KJ talked about Obama’s charisma, his organizational skills in his campaign, and that the glass ceiling has now been shattered by “a guy with a funny name”. He scored points by not referring to himself as “Little Barack” on national television and had the best necktie of the night, but was not as compelling as Seal was in capturing the importance of this presidency on a global perspective.

Mayor Kevin Johnson plans to present a voter initiative to increase the power of the office of the mayor, the Biz Journal reports. The office would function as an executive one rather than simply another vote on the council. My hunch is that the voters will probably first want to see whether KJ can actually execute something other than sick dunks 15 years ago, but I suppose it will depend on how he sells it. 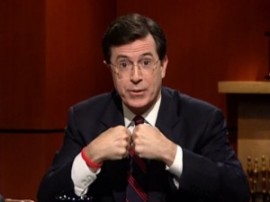 After being twice admonished by reader Brambles for not blogging the KJ appearance on Colbert (I think partly I blanked because it was supposed to be on tonight, and not on the 11th) I finally checked it out. Thank Jeebus for the online television. I myself have gone without cable for a few years now and mostly not had to look back, what with the plethora of online options, and the sublime unintentional comedy of “One Tree Hill.” Next week: a 1920s fantasy episode written by Chad Michael Murray. That is can’t miss TV right there. But I’m digressing…

END_OF_DOCUMENT_TOKEN_TO_BE_REPLACED

SACRAMENTO–Mayor Heather Fargo today released the following statement regarding the recent radio advertisements about Kevin Johnson having been investigated for misusing federal funds:

Ã¢â‚¬Å“Kevin Johnson was banned by the federal government from all access to federal grants and contracts after investigators said he misused AmeriCorps funds.

Ã¢â‚¬Å“My campaign material does not use this issue against Kevin Johnson; however, an independent committee has.

Ã¢â‚¬Å“In light of the Sacramento Bee story this morning, I hope the independent committee would stick to the facts in their advertising.

Ã¢â‚¬Å“Sacramentans can make their own judgment about federal authorities’ investigation into Kevin Johnson’s misuse of federal funds.Ã¢â‚¬Â

You got the point, right? She definitely does NOT want to remind people twice in about 200 words about the federal authorities investigation into Kevin Johnson’s misuse of federal funds. Don’t you dare imply that she does.

I’ll be attending the Sacramento Mayoral Debate between Mayor Heather Fargo and Kevin Johnson on Monday at CSUS. It will be broadcast on KCRA-3 and Capital Public Radio 90.9 from 6:30-8:00 pm. Walt Gray, Pamela Wu and Jeffery Callison will moderate.

Most of the audience will be college students, who will also present most of the questions.

What questions would you like to ask the candidates?

Ah, what kind of election would it be if we didn’t have last-minute desperation from candidates with too much money in their campaign chests?

The SacBee reports today on a mailer sent out by a group called Democratic Voters Choice with the catchy slogan, “Make it Emphatic, Vote Straight Democratic!” The only problem is that this group has been sending out virtually identical flyers for almost 20 years to trick Democrats into voting for GOP candidates in non-partisan local races. Local candidates Susan Peters, who is VERY Republican, and Kevin Johnson, who I will very kindly refer to as an “idealistically conflicted Democrat”, are both endorsed and are both listed in the fine print as the folks who paid for this deceptive flyer.

Kudos to the Bee for being on top of this story. The flyer is included for your enjoyment after the jump.